We start this first chapter with a short introduction to computers and programs. If you have previous experience programming, or would prefer to jump ahead to the first section on Python programming. Otherwise, the goal here is to ensure you have a good foundation and understanding of essential general topics before introducing computer programming using the Python programming language.

You might be wondering about why you should even bother learning to program at all. Most likely you are not a computer scientist after all, but neither are we. Yet all of the authors of this book have developed their basic computer programming skills to be able to write and use simple programs. Even very short computer programs can be very useful!

So, why bother? Well, the fields of geoscience and geography are becoming increasingly quantitative. In both fields we are now processing larger datasets, using numerical models, and performing other quantitative tasks that benefit from having some basic programming skills. Even these basic skills ca allow you to do more in exploring, manipulating, and analyzing your data. For example, many software packages used for data visualization or GIS now include the possibility to include your own Python scripts within the programs to extend what they can do. 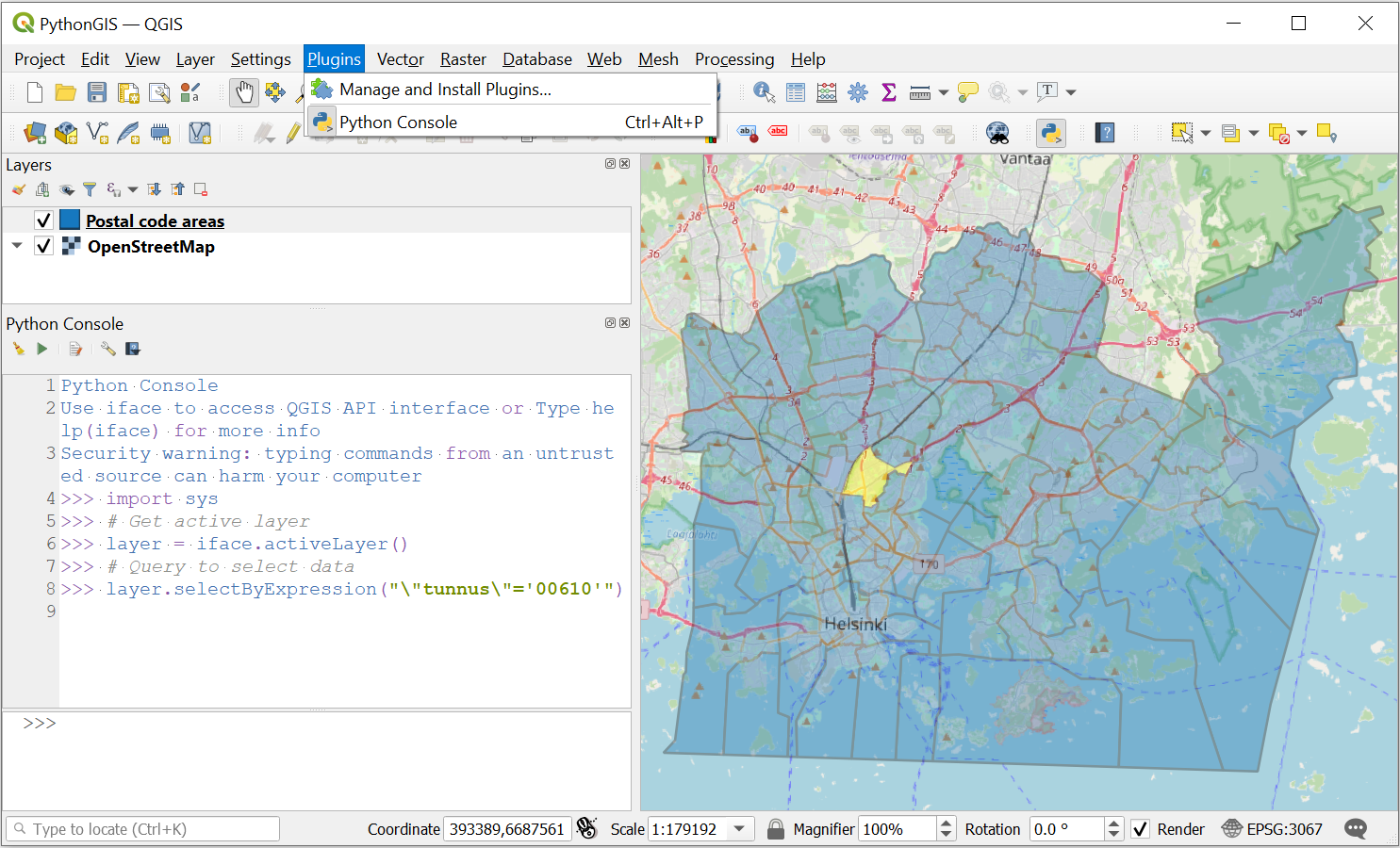 Figure 1.5. Using the Python console to interact with GIS data in the QGIS program (https://www.qgis.org/).

Programming can also be fun! Once you learn the basic syntax you may enjoy finding ways to break complex problems down into simpler pieces, developing strategies for solving programming problems, and texting your solutions. This is part of the reason that children are being introduced to programming ideas in books such as the Hello Ruby series (Liukas, 2015). Coming up with solutions with simple programs can be exiting and rewarding, and you can test your solutions right away to see whether or not your solution works!

Moreover, programming can help make us better scientists. The scientific method 1 is fundamental to how scientists conduct their research. It includes defining questions, gathering information, formulating and testing a hypothesis, analyzing experimental data, interpreting data and drawing conclusions, publishing results, and retesting. Learning basic programming skills can help us with many of these steps. Collecting data, performing experiments, and analyzing data can all be made more efficient using simple programs. For example, we will see how to take take multiple daily temperature observations and use them to calculate monthly average temperatures to investigate wamring trends in the monthly data as part of Chapter 2 in this text. In addition, we will introduce several good programming practices in the first part of this book that will help ensure our experiments and analyses are reproducible, which is a key aspect of open science 2.

Before we move into introducing programming concepts and the Python language, we will spend the remainder of this chapter with some basic terminology related to computing.

Figure 1.6. Diagram of the essential elements of a computer. Simplified from Zelle, 2017.

In its simplest form, a computer takes input from an input device such as a mouse or keyboard, processes that input using the central processing unit (CPU) and memory, and provides output to a device such as the screen. The processing that is done is by the CPU manipulates data, modifying the input prior to being output. The steps for processing could be given in a computer program, which we will define below. An essential aspect of the programs used by a computer is that they are changable, so the instructions used by the computer can be modified to alter the output that is produced. Overall, the computer allows us to take input, modify it into a new/useful form, and output it for our interpretation.

What are computers good at?¶

Given the definition above, it may be clear that computers are in some ways quite simple, and as a result there are certain tasks where computers excel. Tasks computers are good at include:

For example, given the instructions to add 2 plus 2 and return the answer in a language the computer understands, it will readily perform that calulation and return the expected value, 4.

What are computers bad at?¶

Of course, while computers can be immensely powerful and perform staggering calculations, there are some kinds of problems that computers struggle with. These include:

But there are practical limitations as well for tasks computers can do well. If problem sizes are simply too large to calculate, the computer will be unable to complete them. The most powerful supercomputers in the world today 3 have several million processor cores and the ability to calculate more than 100,000 trillion floating point operations per second 4. Yet even those massive systems have limitiations. Imagine we have a digital elevation model of the Earth (including seafloor bathymetry) with a resolution of 1 micrometer (\(1 \times 10^{-6}\) meters). Now let’s assume we want to calculate the slope from all points in that model. The total number of surface elevation points we would have would be approximately \(5 \times 10^{26}\), and if each slope calculations requires three floating point operations, we have a total of \(1.5 \times 10^{27}\) operations. Even on one of the fastest supercomputers in the world, this calculation would take nearly 500,000 years! Of course, this is a bit of a silly example, but it is clear there are computational limits.

What is a programming language?¶ 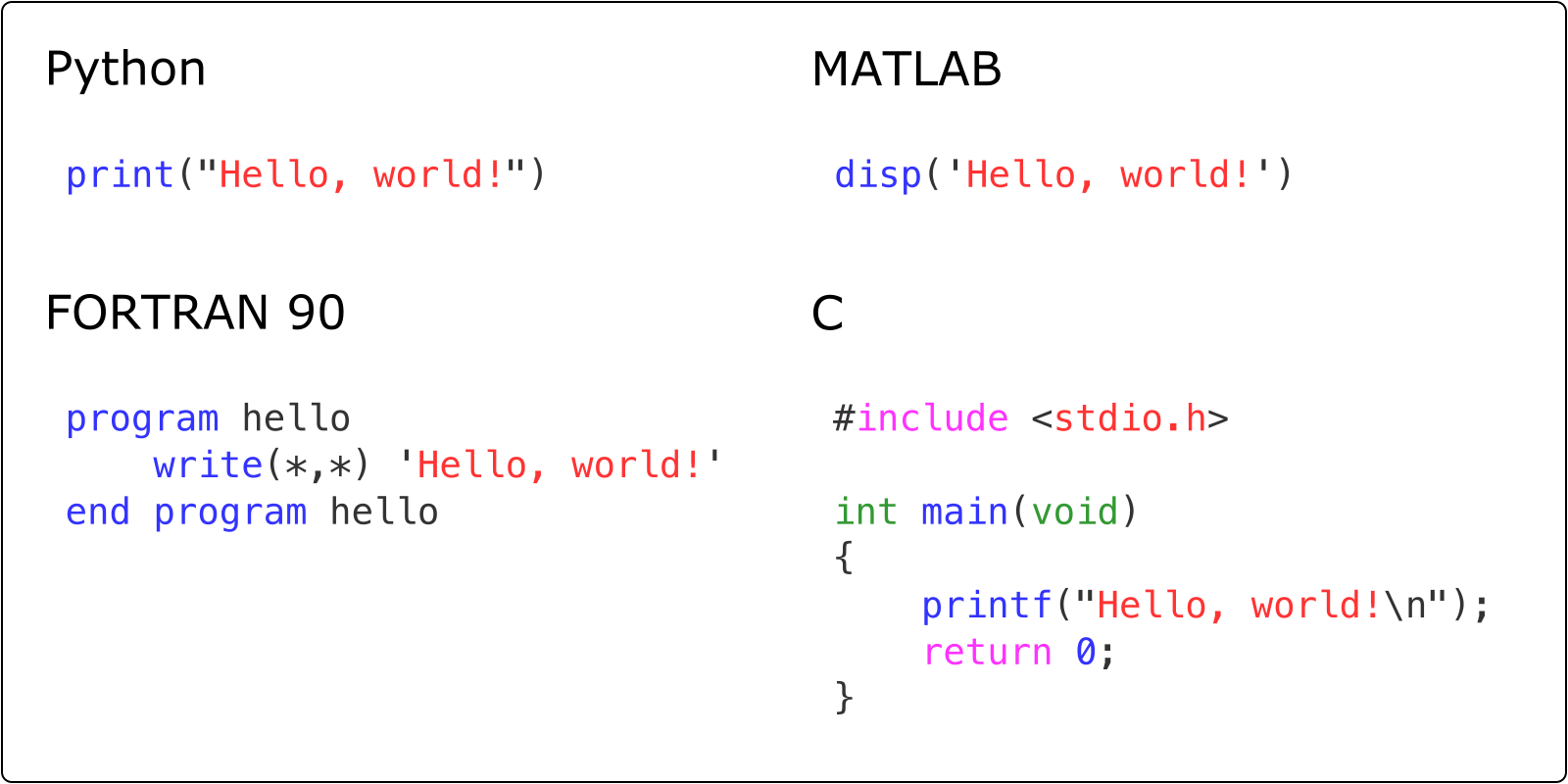